Actor/Comedian Paul Rodriguezâ€™s new theatre production, The Pitch, is sure to shake things up in Hollywood.Â  Leave it to funnyman Rodriguez to aim the spotlight on the challenges that Latinos go through when pitching a TV show to network executives. The Pitch, while entertaining, manages to tackle some of the major issues facing Latinos in Hollywood: casting, cultural gaps, and the networkâ€™s desire to stereotype Latinos in most roles. 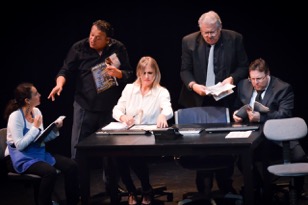 â€œWeâ€™re floating on some lost planet in the universe called oblivion,â€ said director, William Virchis. â€œThe Pitch is a comedic roller-coaster ride, as Paul takes us on a personal journey of the ups and lots of downs in pitching a series â€“ it is pure teatro!â€

Rodriguezâ€™s, The Pitch, uses humor to shed light on the reality about why Latinos are invisible on TVâ€”the most powerful medium in the world. The two-act dramedy recounts his personal experiences pitching a TV series to executives who hold the power to green-light a show.

â€œIt was an opportunity to turn a twisted situation into a twisted comedy,â€ said Rodriguez. 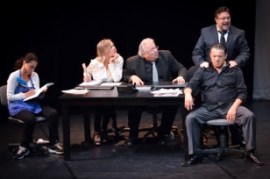 Â â€œFather of Chicano Musicâ€ Lalo Guerreroâ€™s music helps frame the productions opening and ending. Guerreroâ€™s music is a perfect fit for The Pitch as his corridos told stories about the struggles and triumphs of Mexican-American heroâ€™s from Cesar Chavez to Ruben Salazar.Â  He often said, â€œI only wrote about what I saw.â€ Opening night will also honor Guerreroâ€™s son, Dan Guerrero as he is inducted into Teatro MÃ¡scara MÃ¡gicaâ€™s, The Artistas de Honor Hall of Fame.

The Pitch has a lot of heart and is hugely entertaining. And, while it is based on Rodriguezâ€™s own personal experience, it reflects a trending issue in Hollywood that many can relate to.