If you need to read this summary of what IT is then we pity you. A group of bullied kids band together when a monster, taking the appearance of a clown, begins hunting children.

Andy Muschiettiâ€™s (Mama) adaptation of the first half of Stephen Kingâ€™s worshipped novel is surprisingly heartfelt, if a little mechanical for the scares it constructs. For those who have lived under a rock, in a cave or perhaps the Macroverse,IT is the story of a group of outcast kids who must face off with unimaginable evil if they hope to survive childhood in the small town of Derry, Maine.

The film opens much like the book, with Bill (Jaeden Lieberher), in bed on a blustery, rainy afternoon recovering from the flu, while younger brother Georgie (Jackson Robert Scott) is begging to go outside in the rain and play. Bill compromises and creates a paper boat dubbed the S.S. Georgie for his younger brother to play with. While chasing his boat in the deluge, Georgieâ€™s vesselÂ gets sucked into a gutter drain. While peering into the darkness for his boat, we come face to face with Pennywise (Bill SkarsgÃ¥rd). Yes, the opening scene is as harrowing as you might expect with Georgie meeting his demise at the hands of the killer clown, and this scene lets us know we are in for one hell of a ride. â€œRight, but what about Pennywise? How is Bill SkarsgÃ¥rd as Pennywise?â€ I can hear you asking. Heâ€™s fine. He is not given the lionâ€™s share of screen time that Curry had in the miniseries for a number of reasons and that is actually a good thing. The creature ofÂ IT is a shapeshifter whose chosen form is a killer clown, but he is prone to taking different forms. When we first meet him, luring Georgie to the sewers, it is clear this is not something we have seen before. Caked in makeup and sporting bunny-like buck teeth, SkarsgÃ¥rdâ€™s Pennywise is a ragged, twitchy creature. He salivates uncontrollably looking at his prey and when he goes in for the kill itâ€™s pretty spectacular.

The movie then moves forward to the end of the school year. Itâ€™s the last day of class and we gradually meet our protagonists. These are the outcasts, what will soon become the Loserâ€™s Club. We know Bill, but we next get to know his friends, comic relief and loudmouth, Richie (Finn Wolfhard), asthmatic hypochondriac Eddie (Jack Dylan Grazer), and Jewish good-kid Stan (Wyatt Oleff). They are typically bullied by Henry (Nicholas Hamilton) and his clan, promising a summer of unending torment. Meanwhile we get to know Bev (Sophia Lillis, channeling a young Amy Adams), chubby bookworm Ben (Jeremy Ray Taylor) and orphaned Mike (Chosen Jacobs) who works with his relatives in the Derry slaughterhouse. The next question I am guessing that you might have is, â€œHow is the Loserâ€™s Club?â€ Pretty much perfect. There is a genuine chemistry with the seven kids that is remarkable and sincere. A particular standout is Jeremy Ray Taylor as Ben. There is a certain honesty to his delivery that is endearing.

Director Muschietti must be given credit for delivering a handsome-looking film that is consistently entertaining if not entirely terrifying. There is a lot of ground to cover in the beginning with a total of six protagonists that we must learn about, with each character dealing with demons from inside. Sure there are the bullies, but each of them experiences visions that prey on their deepest, darkest fears. Bill continues to see his dead brother, Eddie is pursued by a gelatinous leper, Bev is covered in gallons of blood, Stan is pursued by a creepy woman from a painting at his synagogue, Richie is chased by Pennywise the clown, Ben by a headless boy, and Mike sees visions of his parentâ€™s fiery death. The scenes are fine but play with a mechanical lack of surprise that is the bane of good horror.

Once united, these six â€œlosersâ€ come together and develop a bond in order to fight against what is pursuing them. Will they defeat this omniscient evil? Chase Palmer and Cary Fukunagaâ€™s script is as faithful as it can be to the sprawling tome while adapting the spirit of the novel to a modern era. This version ofÂ IT begins in the mid 80â€™s. Batman and Lethal Weapon are playing at the townâ€™s only movie theater and the kids make references to things like New Kids on the Block. That change actually works quite well, allowingÂ IT to play out like a mix of The Goonies, Stand By Me and Halloween. This is straight-up horror film that puts kids front and center as the heroes, giving them the credit to be as brave and resilient as any adult. 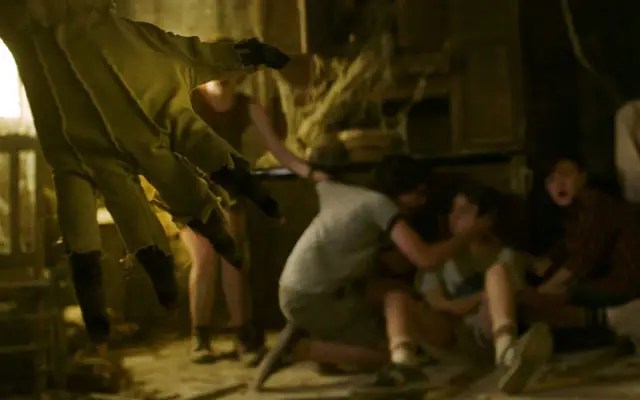 IsÂ IT the perfect King adaptation? What does that mean anyway? It is effective, I will say that. No itâ€™s not exactly like the book and, for the most part, that is a good thing. Have you readÂ IT recently? The book gets a little weird. How doesÂ IT rank in the pantheon of King adaptations? I would say it is on par with Misery and 1408.

In the end, we can be thankful that we had a few scares, we saw the Loserâ€™s Club fight a killer clown together, and we went on one incredible journey. This is a worthy entry into the King cinematic universe and one that I hope to see more of with the promised second half if this one does well enough. Despite minor flawsÂ ITÂ is still wildly entertainingÂ where it counts.

CASTING IN PLACE FOR ALADDIN DIRECTED BY GUY RITCHIE