After two days waiting for waves Cloud 9 has come to life for the 22nd Annual Siargao Surfing Cup Qualifying Series 1,500. In a huge day of competition, competitors were offered up four foot flawless barrels at Cloud 9 for the biggest annual sporting event in the Philippines.

Young Indonesian ripper Rio Waida continued his magical year at Cloud 9 today taking down reigning champion and local superstar John Mark Tokong. In what was the biggest upset of the event so far, 17 year-old Waida looked at home in the perfect right tubes, posting a solid heat total of 13.00(out of a possible 20) to take down the event favourite and progress through the draw.

â€œThis is my first time to the Philippines and Iâ€™m having such a good time,â€ Waida said. â€œThe waves are really good today it was nice to get a few. Coming up against the defending champion was really scary – he is so good out here. Luckily I got in a rhythm and could win the heat.â€

In a field littered with local Cloud 9 specialists there is bound to standout performers notable upsets with victorious local heroes. This was definitely the case in Round 1 heat 6 where Cloud 9 goofy-footer Mark Escultora posted the equal highest single wave score of the day, a 9.00 (out of a possible 10). Escultora disappeared deep in a tube behind the foam-ball and to the surprise of everyone including himself, popped out cleanly. He now moves into Round 2.

â€œI was really nervous surfing today,â€ Escultora. â€œThat was one of my best waves out here so to have it during a heat is really lucky. The other guys were looking at it and I thought I was to deep but just went anyway and somehow popped out.â€ 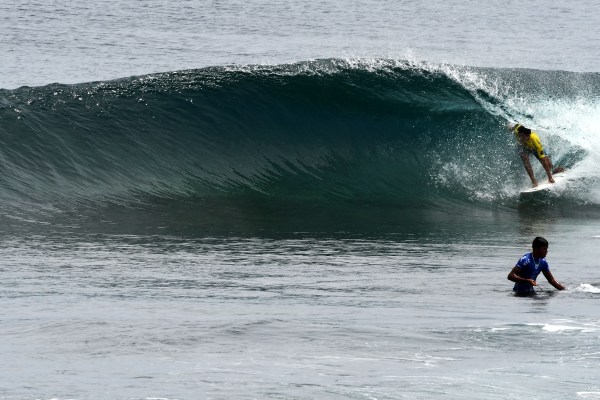 The solitary New Zealander in the draw Elliott Paerata-Reid was lucky to move through to Round 2 as Cloud 9 decided to go a little slow during his heat. While his opponents kept busy catching smaller inside waves throughout the heat, Paerata-Reid waited until, with priority, he was gifted a set wave and the heat lead.

â€œIâ€™d rather loose a heat waiting for a good wave then loosing priority taking bad waves,â€ Paerata-Reid said. â€œI was just trying to back myself and just hope a good one comes. That way, if I lose itâ€™s just bad luck, not I lost because I made a bad decision.â€ 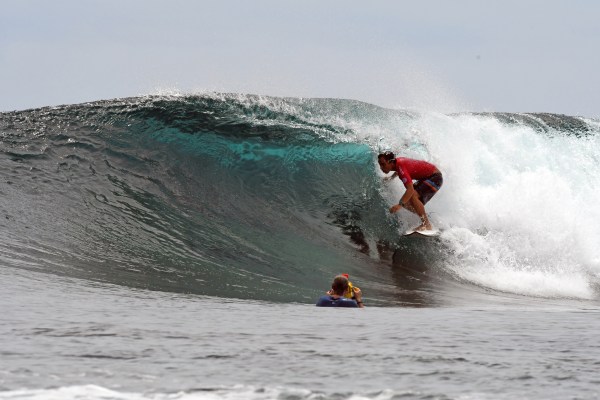 Caption: Â Elliott Paerata-Reid showing off for the cameras: WSL/Bennett

Having been beaten by Aussie Chris Zaffis earlier in the year at the Mentawai Pro, San Diegan Skip McCullough was looking to go one up in the tube-riding duel between the two. McCullough had his chance in Heat 10 and made his intentions clear playing a patient game and waiting for the rare set waves. He was rewarded with a heat total of 14.75 for some solid tube rides as Zaffis joined the list of high seed casualties and was ousted in Round 1 along with aerial surfing icon Christian Fetcher.

â€œI knew that wasnâ€™t going to be easy,â€ McCullough said. â€œI know how good Chris is in the tube after he won the Mentawai event I just had to be patient. Everyone got a turn I was just fortunate that my turn was on the better waves. It was sick to surf with Christian (Fletcher), he is a really cool guy and was just out there having fun which was cool to see.â€ 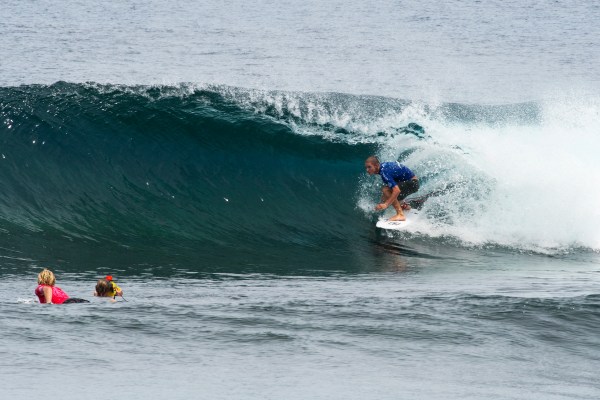 Joao and Lucas Chianca are two Brazilian brothers who ended up in the same heat during Round 1 of the Siargao Surfing Cup. It was Joao who surmounted his sibling and rivals posting an excellent 8.00-point ride to win the heat, his younger brother was eliminated from the event.

â€œItâ€™s tough to surf against my brother,â€ Chianca said. â€œItâ€™s good though because no I will surf for us both. I hope I can get more like that set that I had, that was a sick one.â€

With the sun beginning to set on a massive day of action the wind began to swing to a moderate onshore. Although conditions were not decimated, they were not the clean round barrels of earlier that day. This didnâ€™t hinder Gold Coast natural-footer Mitch Parkinson who laid massive rail turns and a solid air reverse to comfortably win his heat with a combined total of 14.65.

â€œItâ€™s always a shame when you are prepared to get barreled and you have to adjust to just do turns,â€ Parkinson said. â€œItâ€™s all part of it though I guess. I still had a good time out there, my turns felt good and I have a really good board, so Iâ€™m stoked.â€

With three days left in the waiting period and only 17 heats left to run, check back tomorrow atÂ www.WorldSurfLeague.comÂ or check out theÂ WSL appÂ to see if competition continues at 2016 Siargao Surfing Cup.